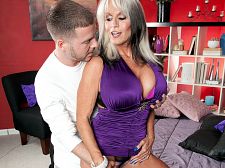 “I adore knob in my ass,” super-GILF Sally D’Angelo says. “A fine, bigger than standard, subrigid, palatable ramrod pumping my little wazoo. It acquires my pussy succulent just thinking about having a bigger in size than run of the mill rogering rod in my booty.”

“The first time I had a weenie in my arse? Well, I was a lot younger than I am now, but it was gripping. We were fucking, and the next thing I knew, there it was! It was so sexy. It made me so excited, so wet.”

In this scene, as a prelude to taking a real wang in her booty, Sally takes out a toy, opens her legs and teases her butthole.

“You do not urge to just jam it up there without a little tanalize, right?” Sally says.

Well, truly, we do, but we’re willing to be gentlemen about it.

Then the chap copulates her face hole and mountainous milk cans at the same time. That doesn’t take skill. It just takes instinct. This stud bonks her shaven love tunnel, and Sally makes those girlie groaning noises she’s celebrated for whilst talking messy.

“I adore that rod!” she says. “It makes my bawdy cleft feel so precious. Stick it right through my chest.”