Return of the Rack 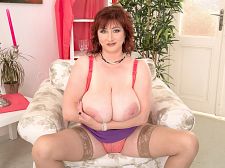 One of the surprise comebacks at SCORELAND is the return of Ivana Gita after 16 years. Ivana emailed us out of the blue from Europe, interested in modeling again. “I worked for u in the 90’s love other youthful big busted honeys. I now have G-to-H cup billibongs,” Ivana wrote.

Veteran Voluptuous readers may remember Ivana from December 1998 and December 1999 V-mag. A Czech, Ivana solely appeared in a handful of photo shoots and hardcore vids before vanishing. At that time Ivana measured 44-27-38, wore a 38E bra, stood 5’5″ and weighed 138 lbs. Now Fourty four years aged, Ivana’s pantoons look four times as greater than average as they were in 1998 and more filled out.

Not much was known about Ivana back in ’98 and not much is known even today. That babe was always a “woman of mystery” sort. We hope to investigate what prompted Ivana’s digi camera comeback and when her astonishing breast growth spurt to her current size began.